Skip to content
Home » What is there to do in Little India Singapore?

I get asked quite a lot about the area in and around Singapore’s Little India. And although I have been here more times than you I can count (I live about 30 minutes walking distance away), I have never really written much about it, until now. I always say, “that the best thing about Singapore is the melting pop of culture, right at your doorstep!”.

Singapore’s Little India was not initially built for the Indian community that migrated to Singapore. Instead, it somehow developed organically over time. The first Indian’s arrived with Sir Stamford Raffles in 1819 and were part of the Bengal Native Infantry. The Indian community first settled in Chinatown, where the first Hindu temple was built on South Bridge Rd.

Later in the 1920s, many Indians began working for the Government, so many terrace homes were built to accommodate the workers. At the time, these were known as Municipal Quarters or Coolie Lines. In addition, many shops and restaurants started to pop up to accommodate the growing number of Indian residents in the community.

Fast forward to the 1980s when the Singapore Tourist Promotion Board (now known as The Singapore tourism board) named this area Little India to promote the preservation of its community and begin to celebrate one of Singapore’s ethnic quarters. 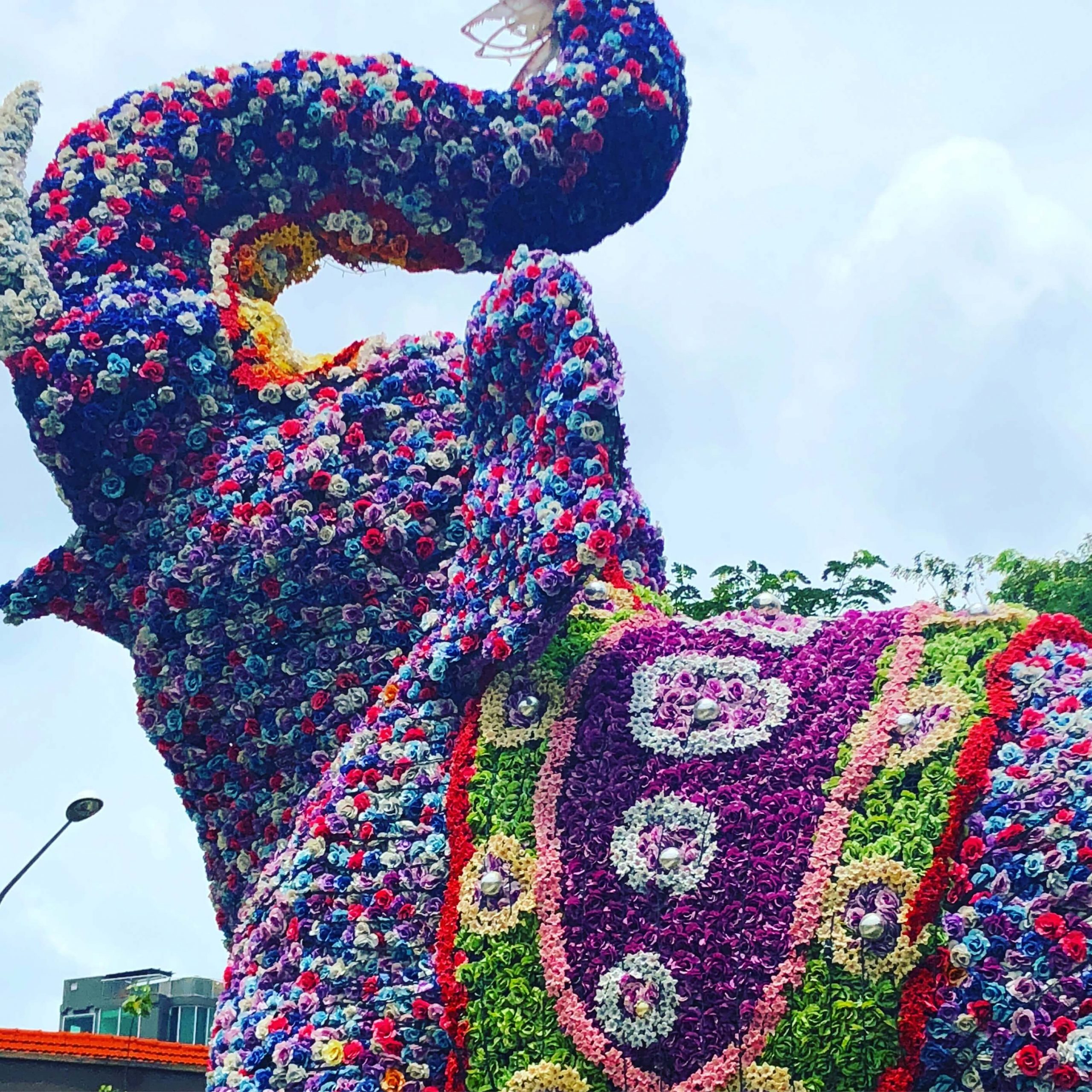 Farrer Park Rd was once a racecourse especially designed for the Europeans that first settled there. However, it also created employment for people who had arrived from Java and India. The old Racecourse was built by the Singapore Sporting Club, which was first established around 1842, leading the development of its Racecourse in 1843.

The Racecourse itself during the war later became the site of the victims of the Sook Ching Massacre. After the war, the premises became popular for all types of sporting events, including cricket and hockey, before its demolishment in 1985. Today the site consists of Farrer Park Primary school and Farrer Park Fie 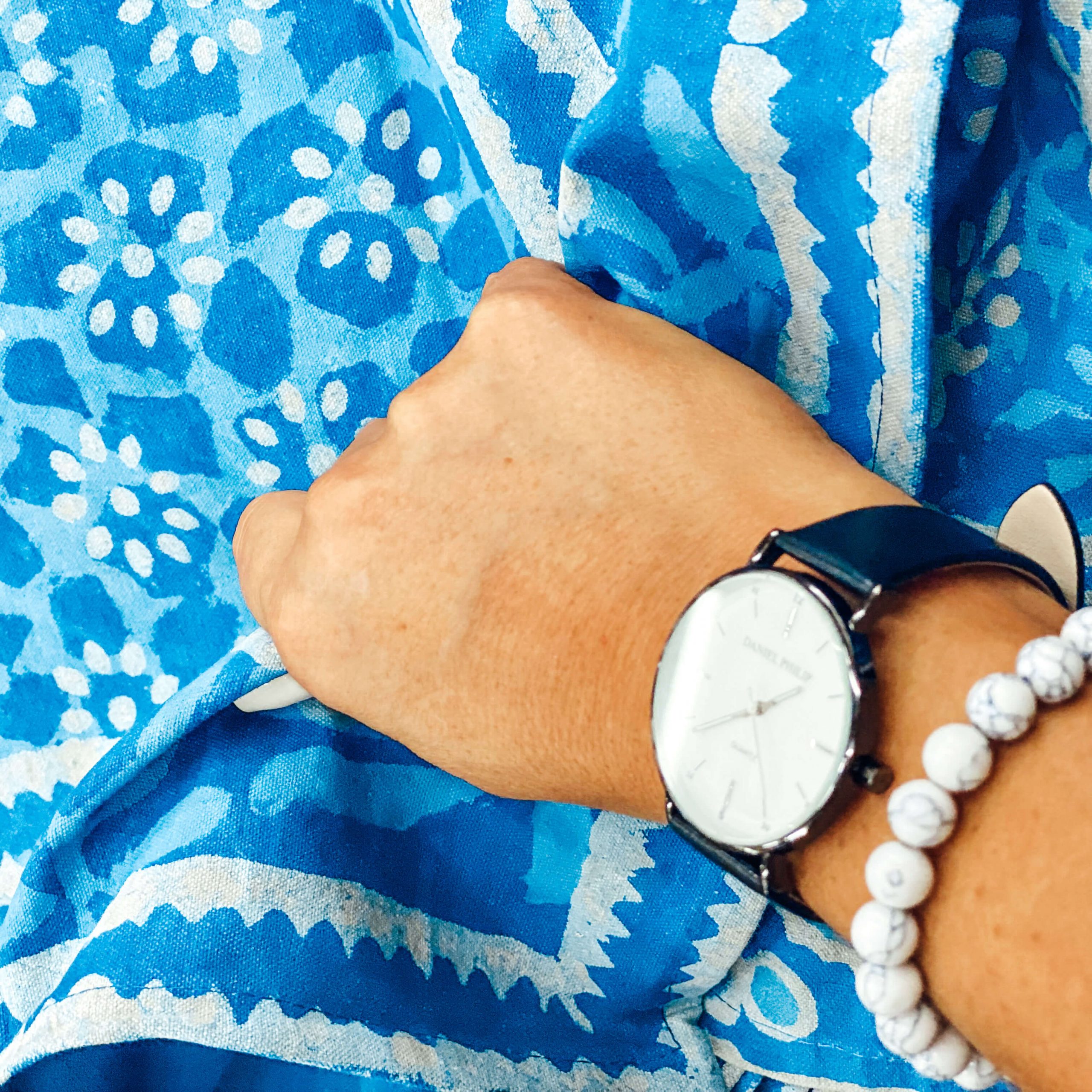 Serangoon Road is one of the earliest known roads built in Singapore. It is said to have been named after the Malay word Ranggong (a black and white bird from the stork family). Another theory suggests it derives its name from the phrase “di-serang dengan gong” or in English “to surround with gongs,” referring to the gongs that were once used to scare away the birds. 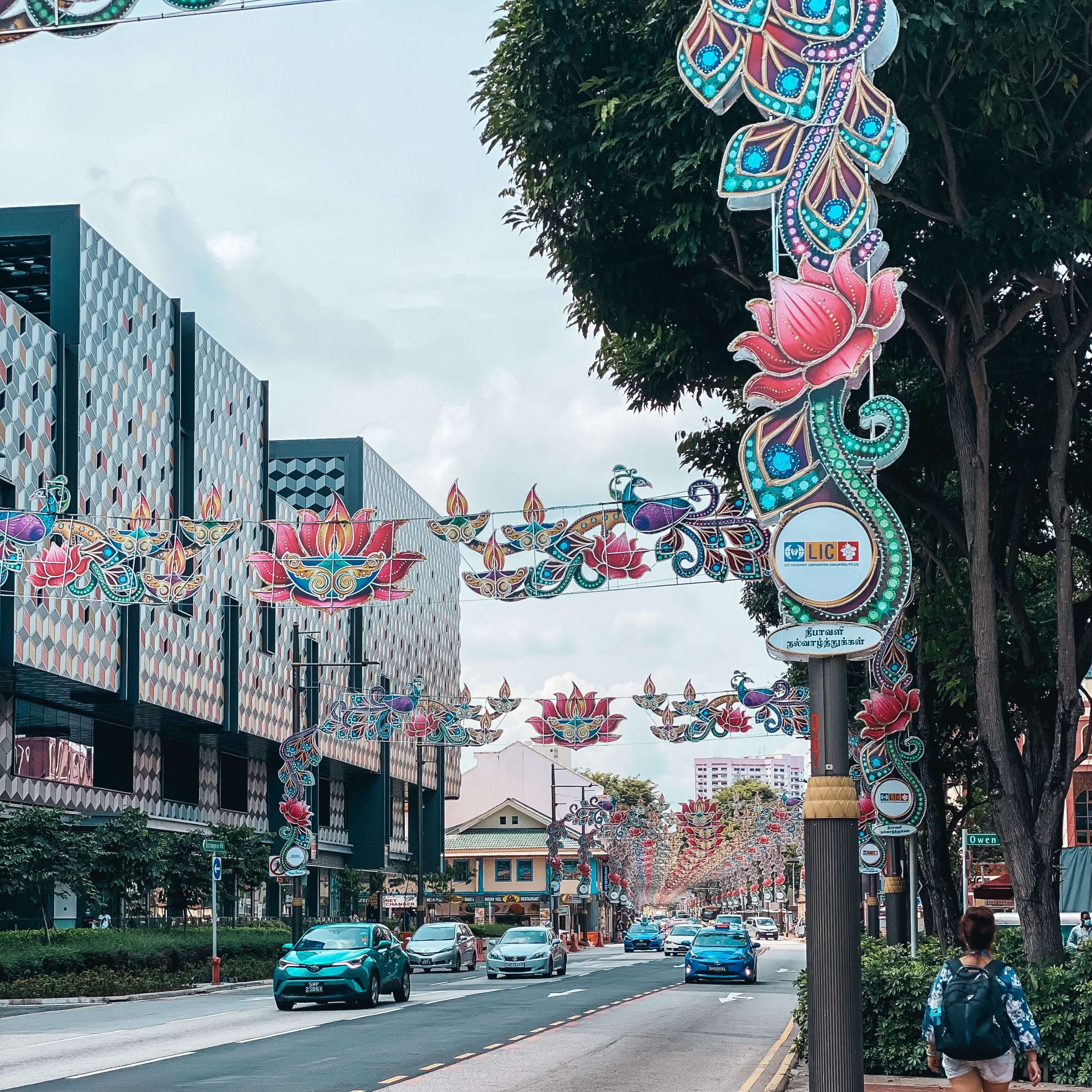 The Indian Heritage Centre is a great place to start your day in Little India; It is a cultural museum that will have you understanding how the area came about in the first place. You can purchase a ticket when you arrive at the museum, or you can show your Friends of the Museum pass and bring along a friend for free.

Ensure you arrive for the free guided tours at 11 am on Tuesday, Wednesday and Thursdays, and 2 pm every other day. 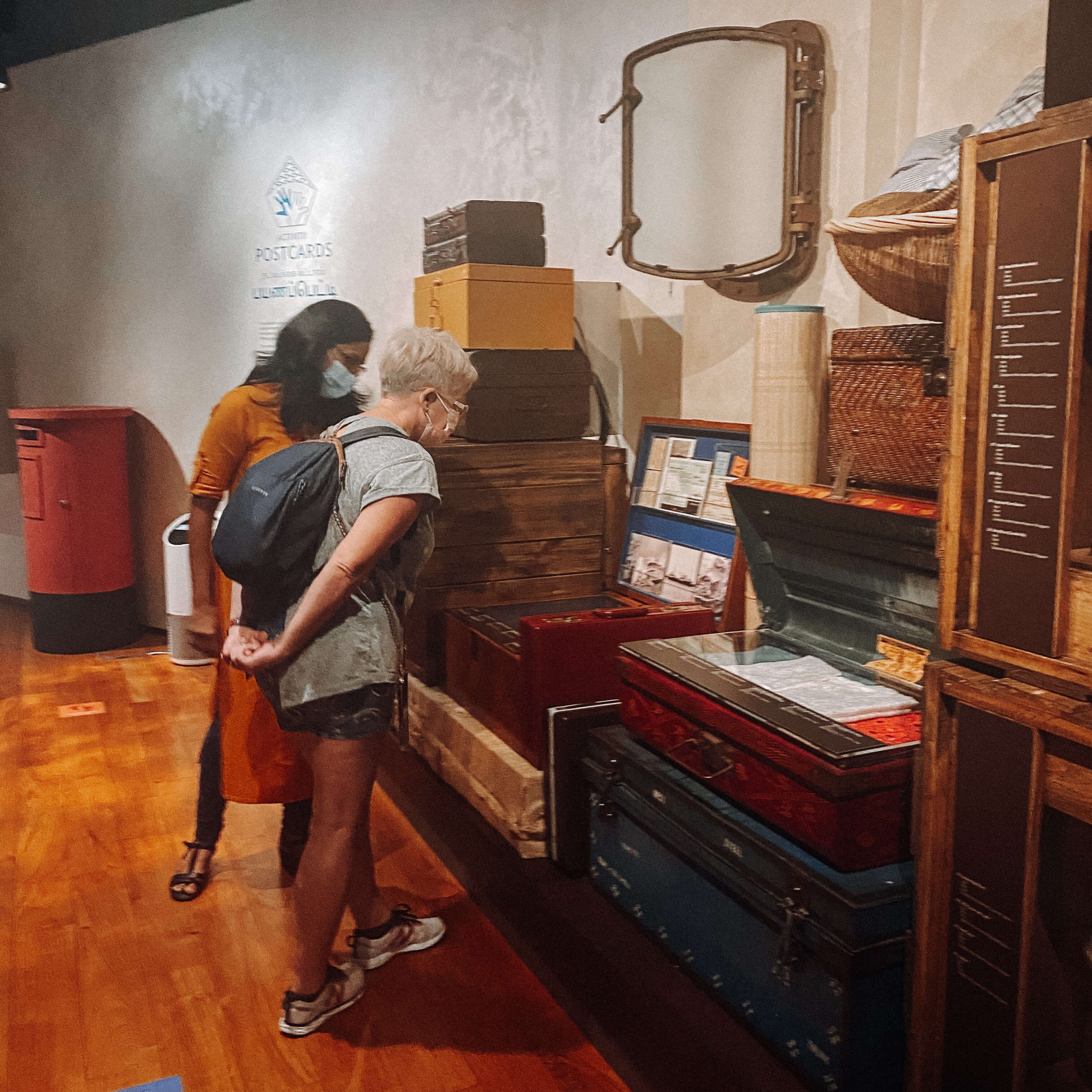 The Sri Srinivasa Perumal Temple is located at 397 Serangoon Rd, Singapore 218123. The temple is another of the oldest Hindu Temples in Singapore as it was constructed in 1855 and later gazetted as a national monument of Singapore in 1978. The temple is known for being the starting point for Kavadi carriers during the Thaipusam festival. Opening hours are from 830am to 1145am daily and are open in the evening from 630pm Sunday to Friday (opening at 615pm on Saturdays) until 845pm.

The Muni Buddha Gaya Temple, or the temple of thousand lights, is another temple in Little India. So it is named because the room in the centre has been lit by a thousand lanterns and lamps, which gives it the peaceful ambience you would expect from a Buddist place of workshop.

The temple was built in 1972 by Thai monk Venerable Vutthisara. The Sakya Muni Gaya is located at 366 Race Course Rd, Singapore 218638. The temple is open from 8 am to 430pm daily.

The Sri Veeramakaliamman Temple is situated at 141 Serangoon Rd, Singapore 218042. It is one of the oldest Hindu Temples found in Singapore today. Built-in 1881 by early Indian settlers, this temple is dedicated to Kali (A powerful goddess and destroyer of evil). The Sri Veeramakaliamman Temple is open from 8 am every day (unless special occasions arise) at 12 pm and until then again in the evening from 630pm to 9 pm. 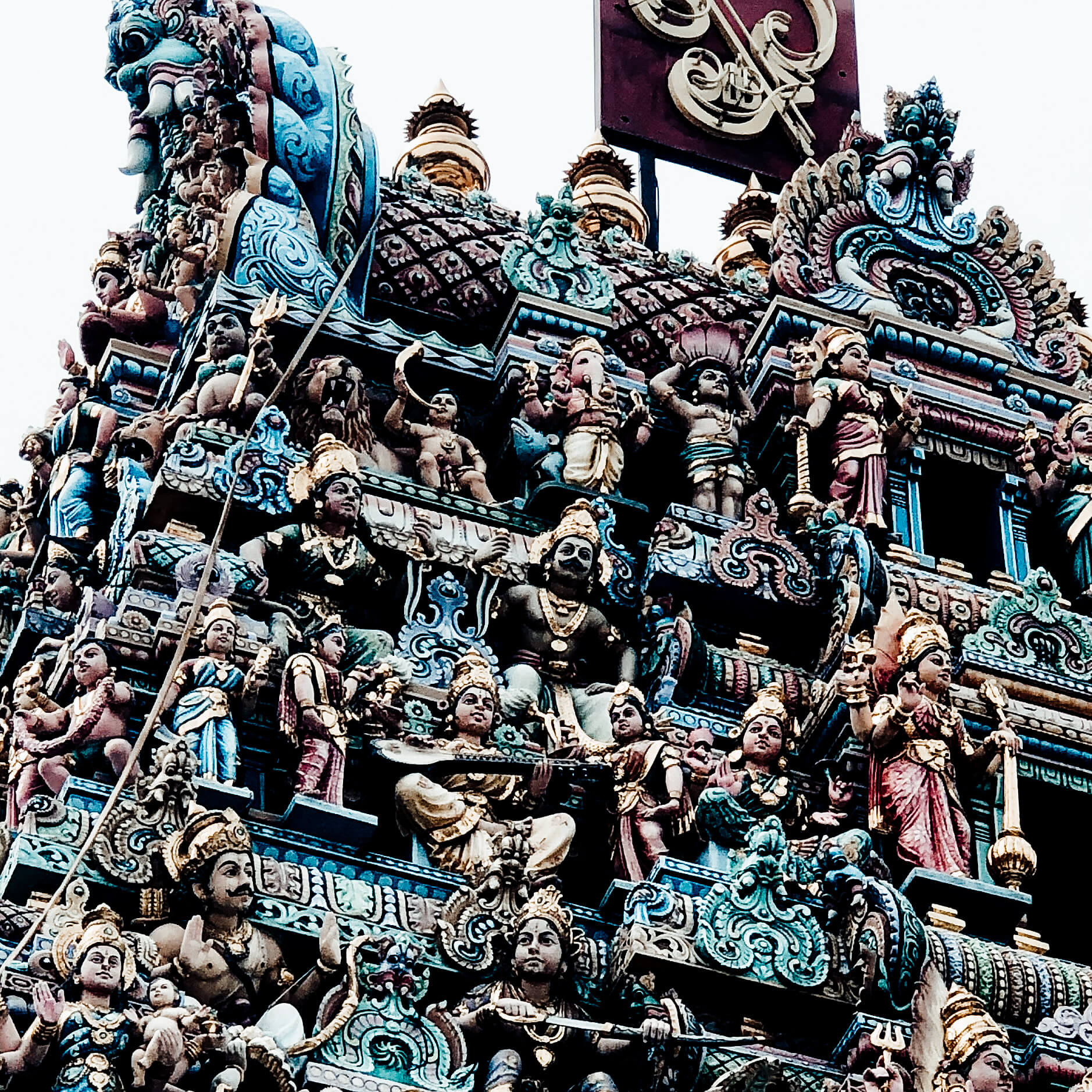 You can also find other means of worship in this area, and The Abdul Gafoor Mosque is one of them. The Abdul Gaffor Mosque was first built in 1907; however, a major restoration took place in 2003. The mosque is located at 41 Dunlop St, Singapore 209369. Head to the middle of the mosque, where you will find the sundial; it is too pretty to put down in words. Opening hours are from Monday to Friday 1 pm to 9 pm, and open 9 am to 1 pm on Saturdays – Sunday’s are closed.

The House of Teng Niah

The house of Teng Niah is found at 37 Kerbau Rd, Singapore 219168 and is more than just a great photo location for your Instagram shot. It has a great history behind it too. Initially built in 1900 by a local businessman Tan Ten Niah hence the origins of the buildings name, the house was then restored around 1980 and is now used for commercial use. 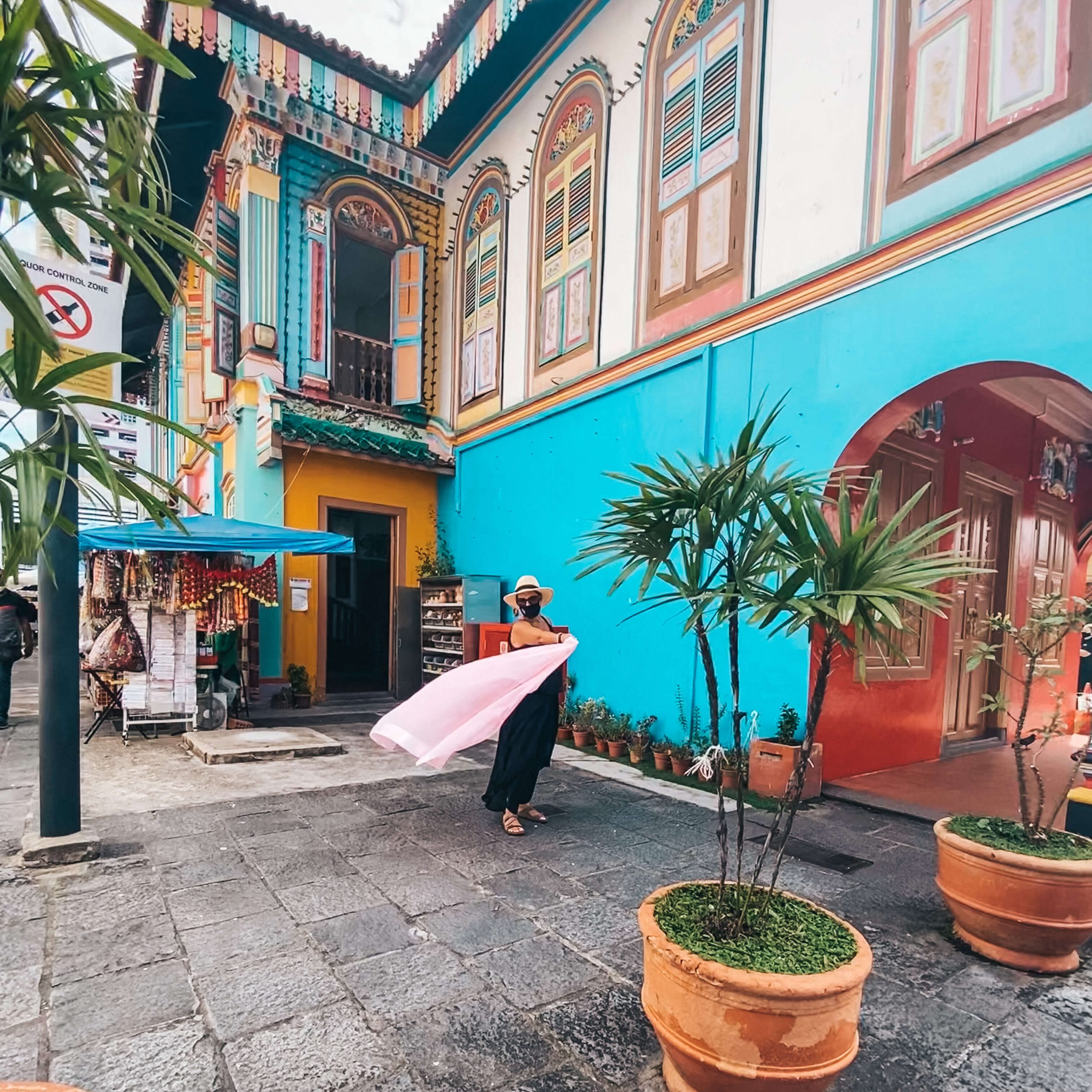 Well, where do I start? The buildings in this area are full of colour, but there are also many beautiful pieces of colourful art spread across many buildings in this area. I have a few favourites but trust me: there are so many more to conquer! Just walk down Racecourse Rd, and you will find one hidden (or not so hidden) in almost every corner! Try not to go street art hunting in the middle of the day because it can be HOT, HOT, HOT! Artwalk Little India is a great way to explore this unique part of Singapore. 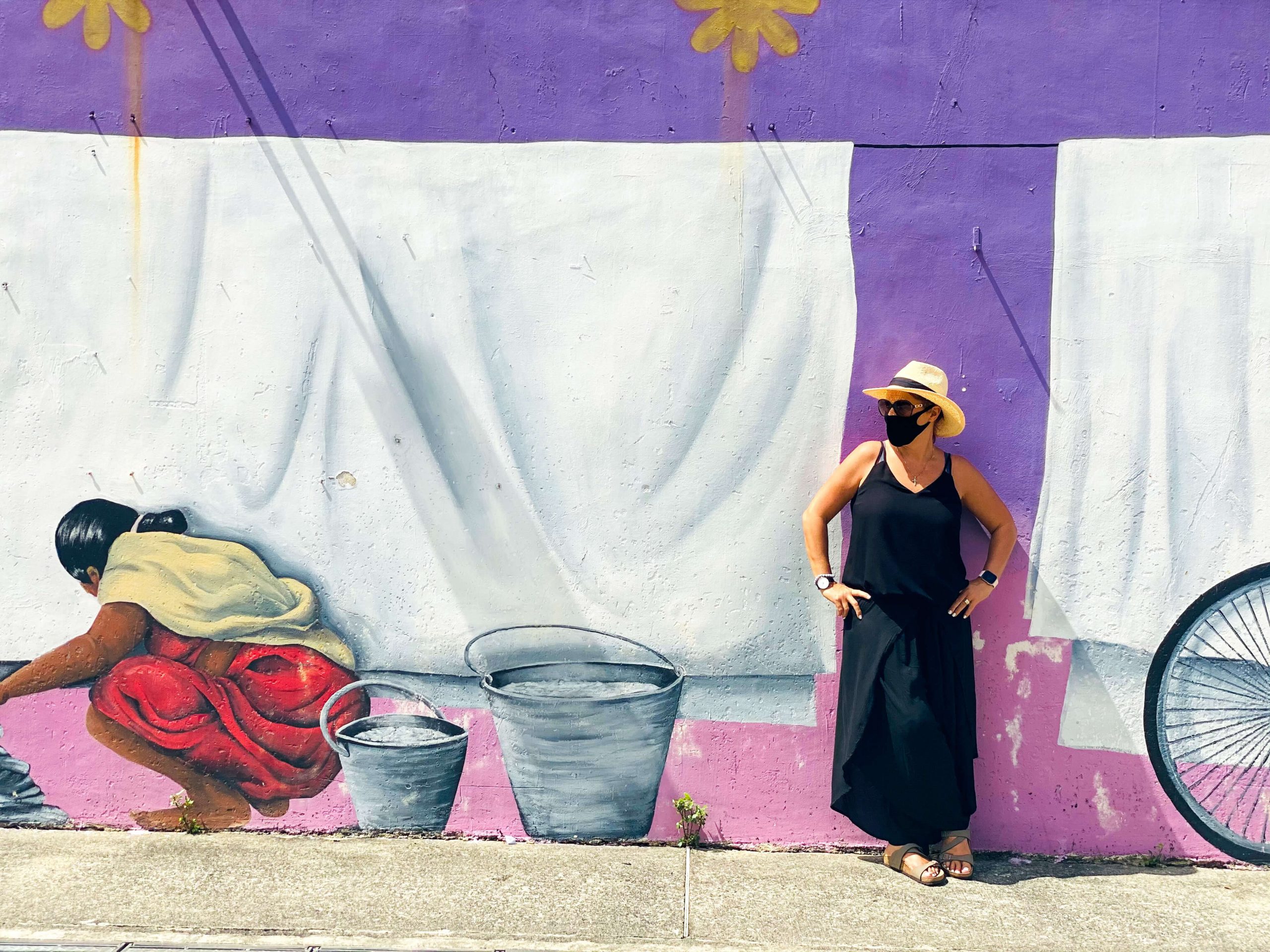 The Little India Arcade is a cluster of brightly painted shophouses built in 1913 and can be found at 48 Serangoon Rd, S217959. Although Little India Arcade has a history in itself, including the buildings current shades, which were painted in 1913, it was officially opened in 1995 to what it is today. An array of restaurants and boutiques with shops selling knick-knacks in the heart of the Little India district. 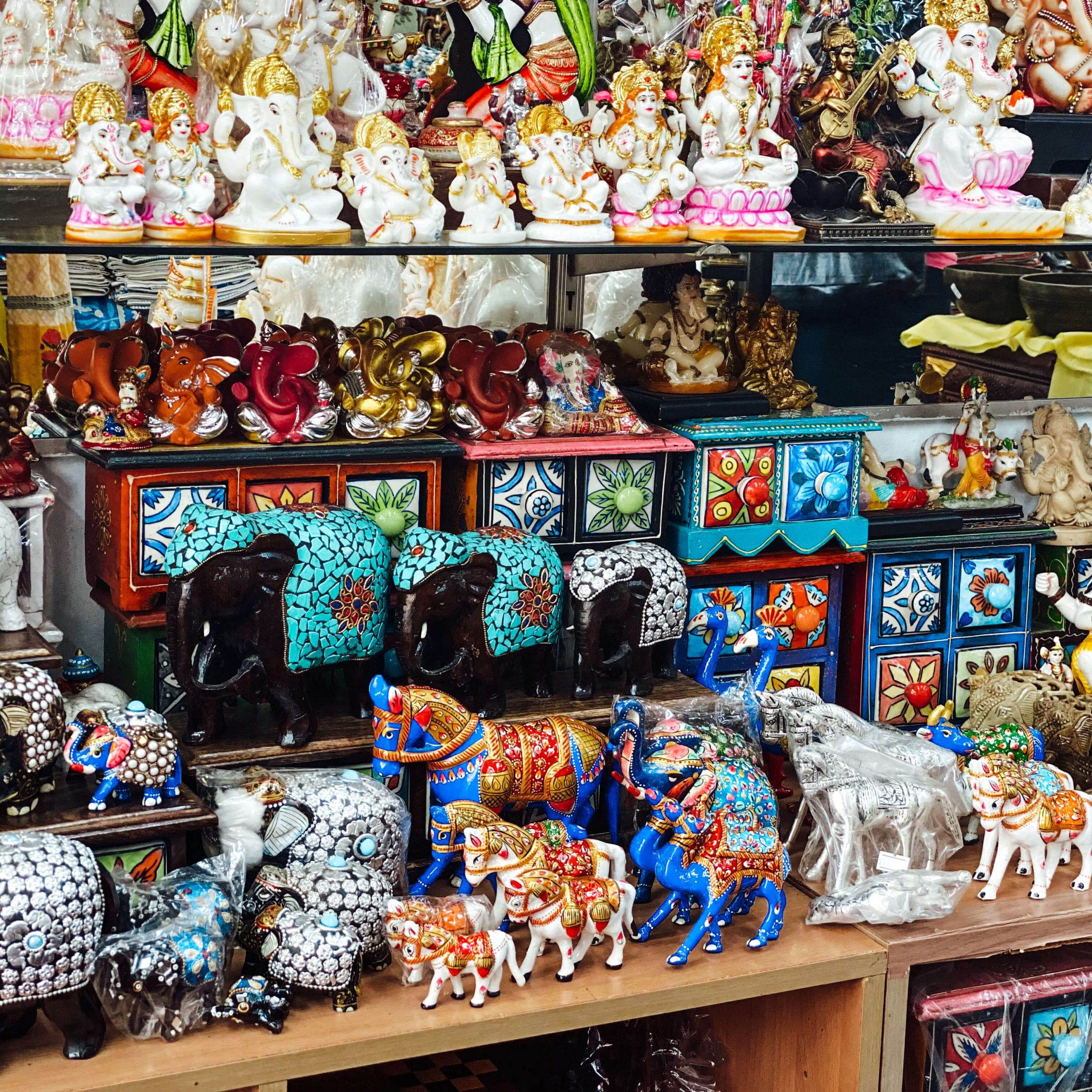 You can not go past Little India without visiting the Tekka Market. Built initially in 1915 and named Kandang Merbau by the Malays and Teh Kah by the Chinese, both for very different reasons, then demolished and rebuilt. Now found at 665 Buffalo Road, Singapore 210665. The market is open daily from 6:30 am – 9:00 pm. Although there are many wet markets in Singapore, there is nothing quite like this one. It is not only the most colourful wet market in the entire country island. It is also selling products for the community in this area. So many products you can’t find elsewhere you are bound to find here. 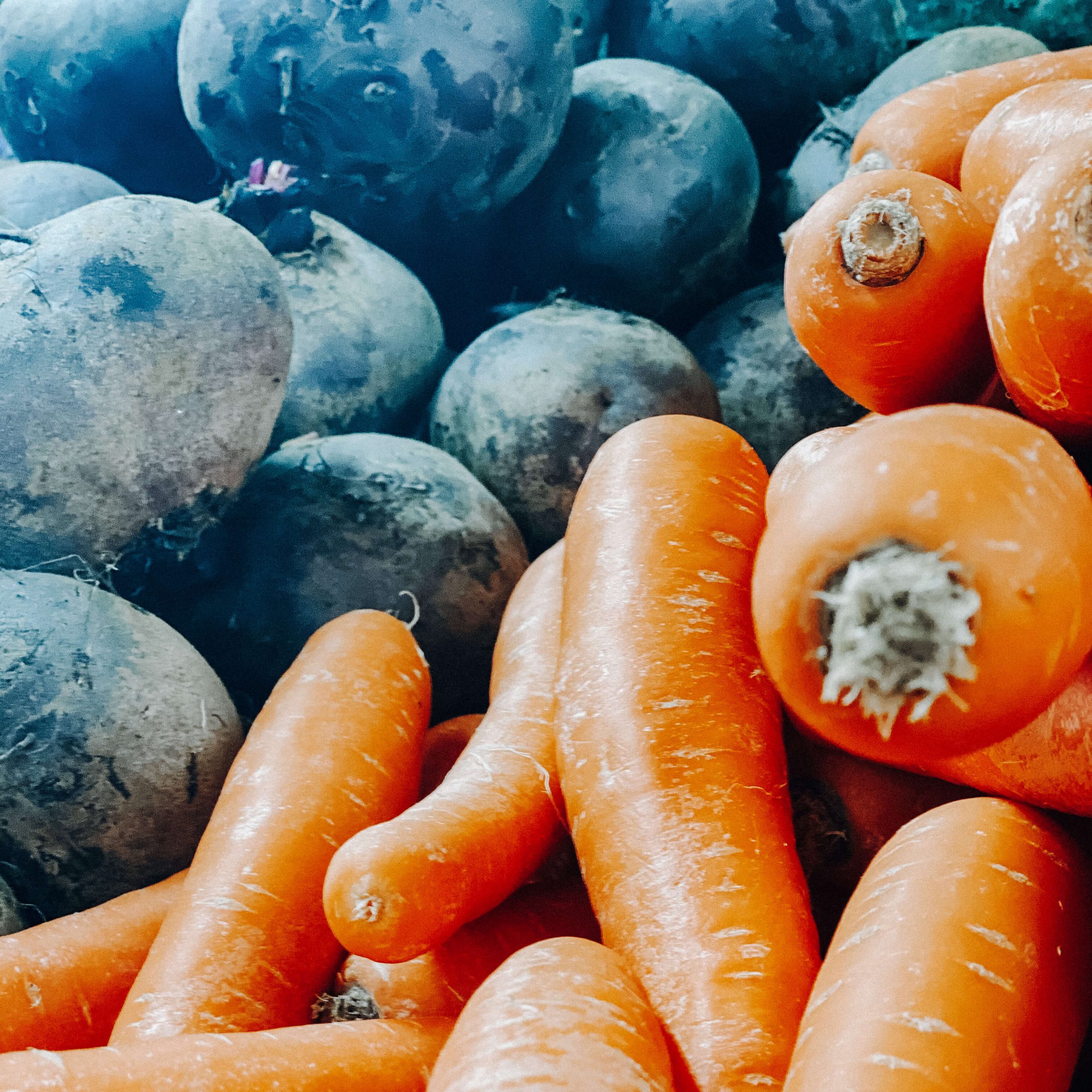 If you cant find it in Mustafa Shopping Centre, you won’t be able to find it anywhere in Singapore (or so they say). This is because Mustafa Centre has so many different sections (it reminds me of a miniature version of Shenzhen). The centre is open 24 hours a day and is filled with eight floors full of items. The Mustafa Centre was opened in 1995 and is a landmark in itself in this area. 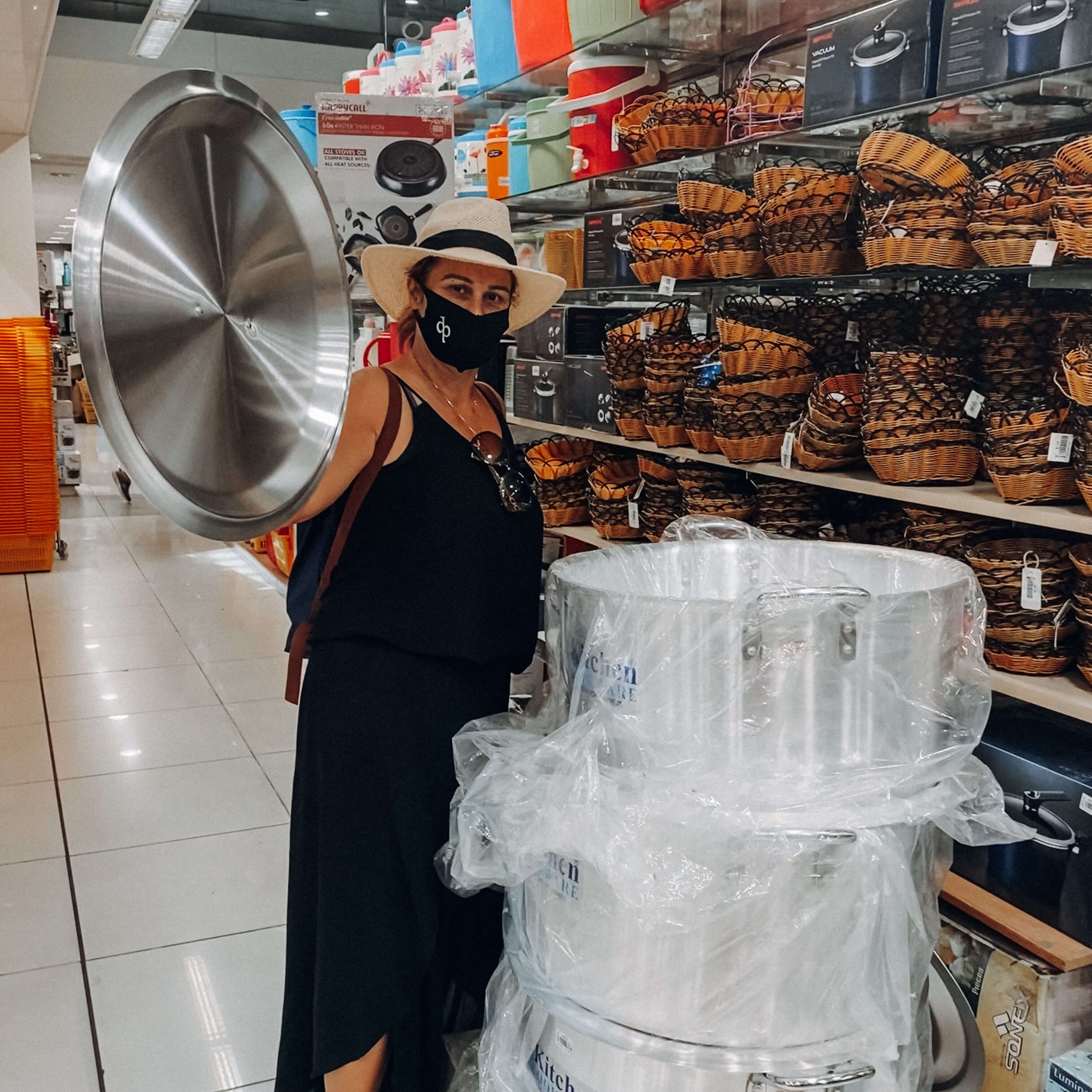 Where to eat in Little India

The food you find in Little India can range from fish-head curry to South Indian vegetarian cuisine. Street food to some excellent dine-in restaurants. Here are a few of my favourites.

The Banana leaf Apolo was established back in 1974. There are four options to choose from; all similar foods but all in different establishments. The Banana Leaf Apolo can be found at: 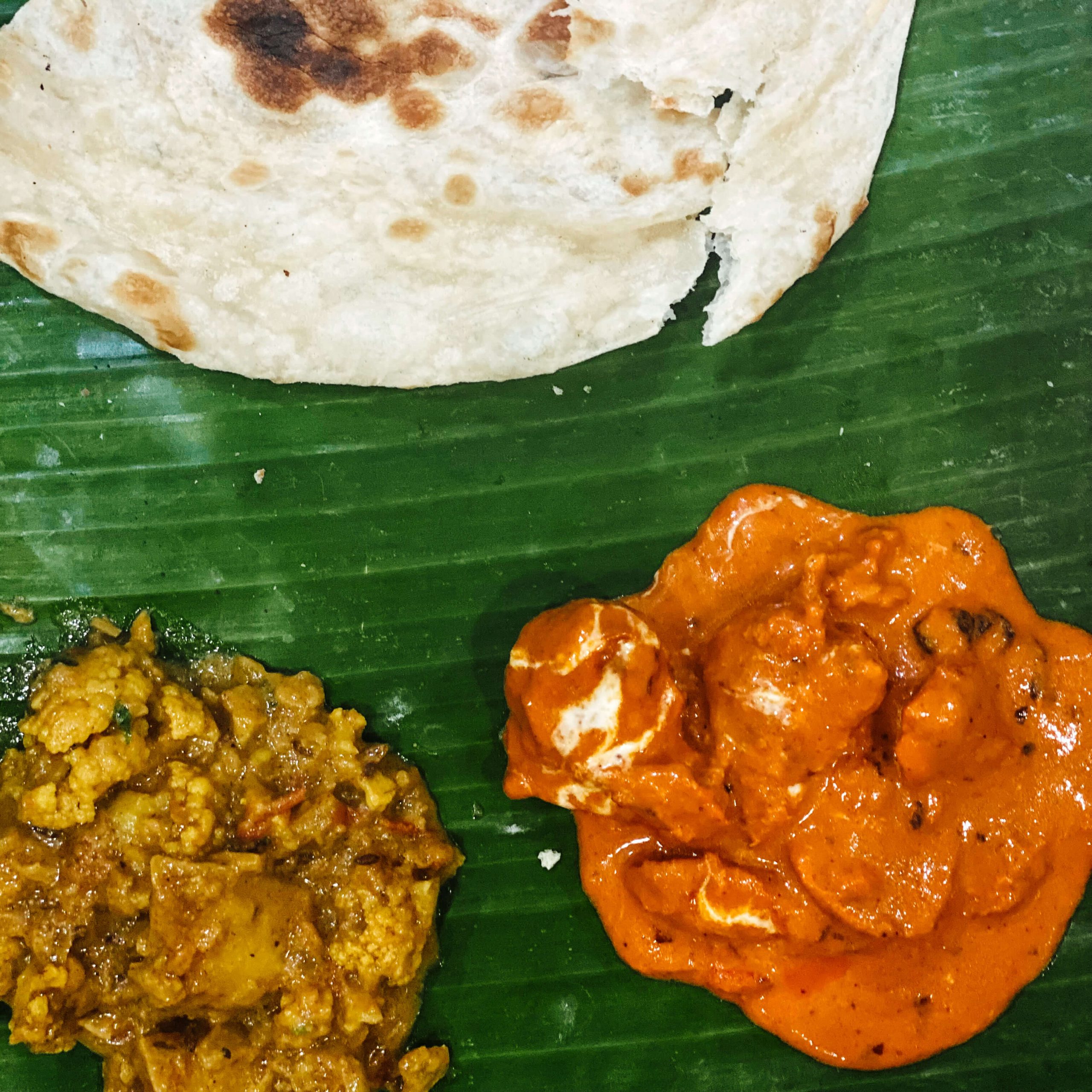 Being the first Indian Fusion restaurant in Singapore, but don’t worry, it lives up to its expectations. Meatsmith Little India will wow you with every dish. You will find this fantastic restaurant at 21 Campbell Ln, Singapore 209894, right beside the heritage centre. I highly the Meatsmiths version of Butter Chicken (it takes a while to prepare); if you are not in a hurry, sit back and enjoy all the other little dishes and drinks this restaurant has to offer. 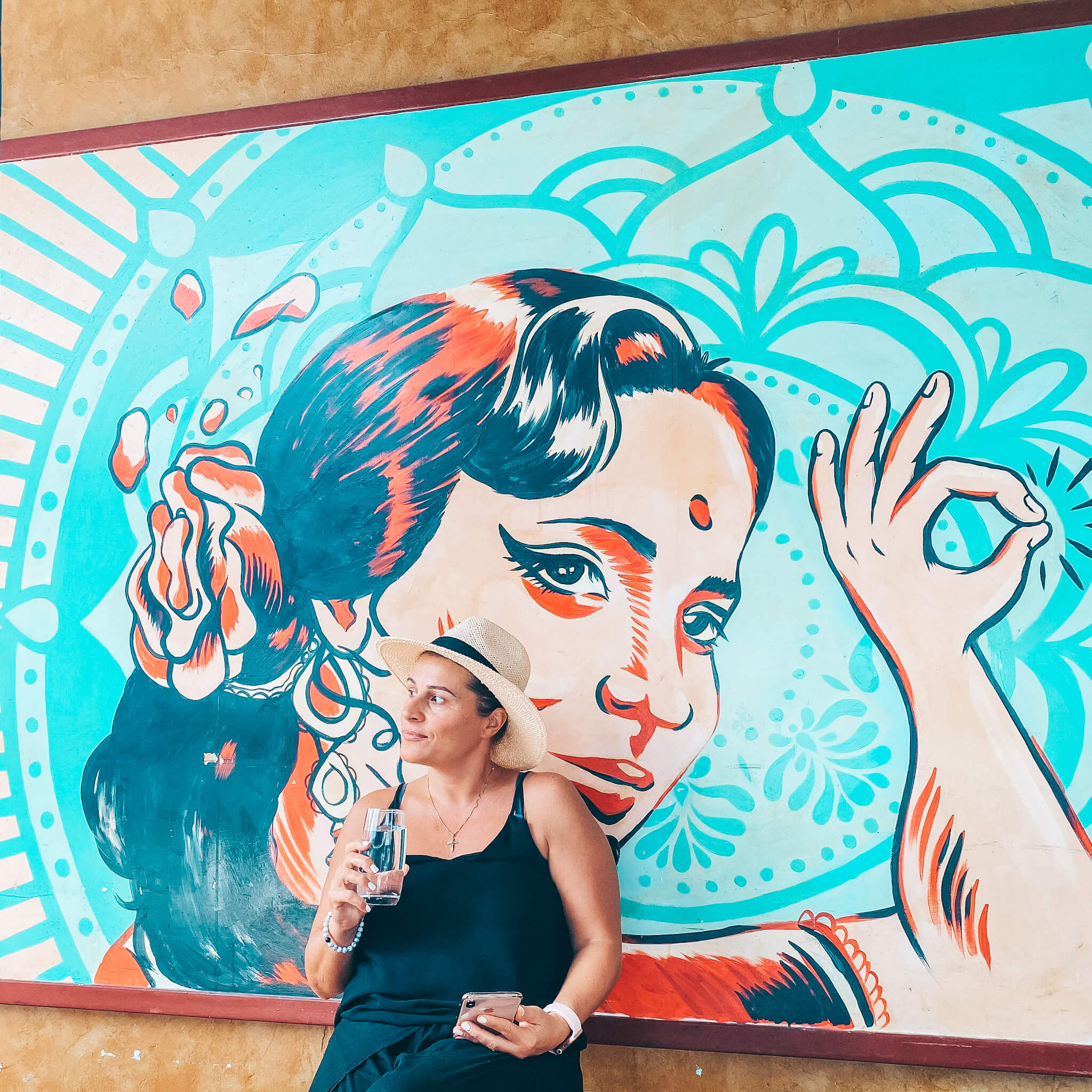 This great little quirky cafe is nothing like others you find in Little India (or Singapore). But, don’t be fooled by its name; Brunches is an all-day cafe with not only your usual brunch ideas but also burgers and other lunch items. When making a reservation at Brunches, ensure you ask to be boothed in the car (yes, there is a real-life car parked in the cafe) – the kids will love it. 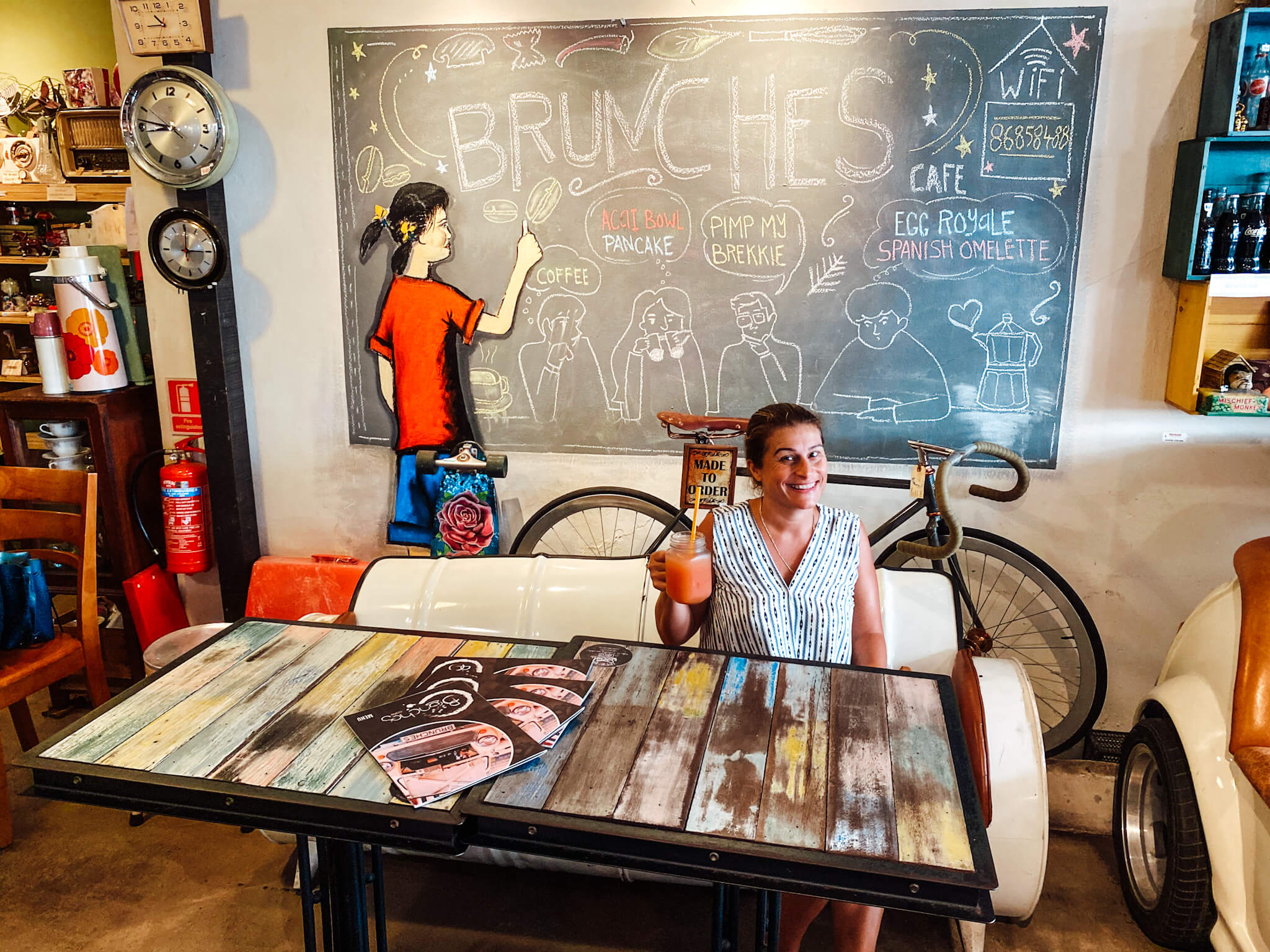 Fancy making a weekend of it? If you are wondering where to stay, close to the action in Little India here is Truly Expat’s recommendation.

Wanderlust, The Unlimited Connection by Oakwood

The Wanderlust hotel has some great offers for your staycation. The unique art deco style of the Wanderlust Hotel in Little India will have you feeling like you have walked straight into the 1920s. Walking distance from Jalan Besar MRT station, this hotel has many great rooms, with and without kitchenettes. 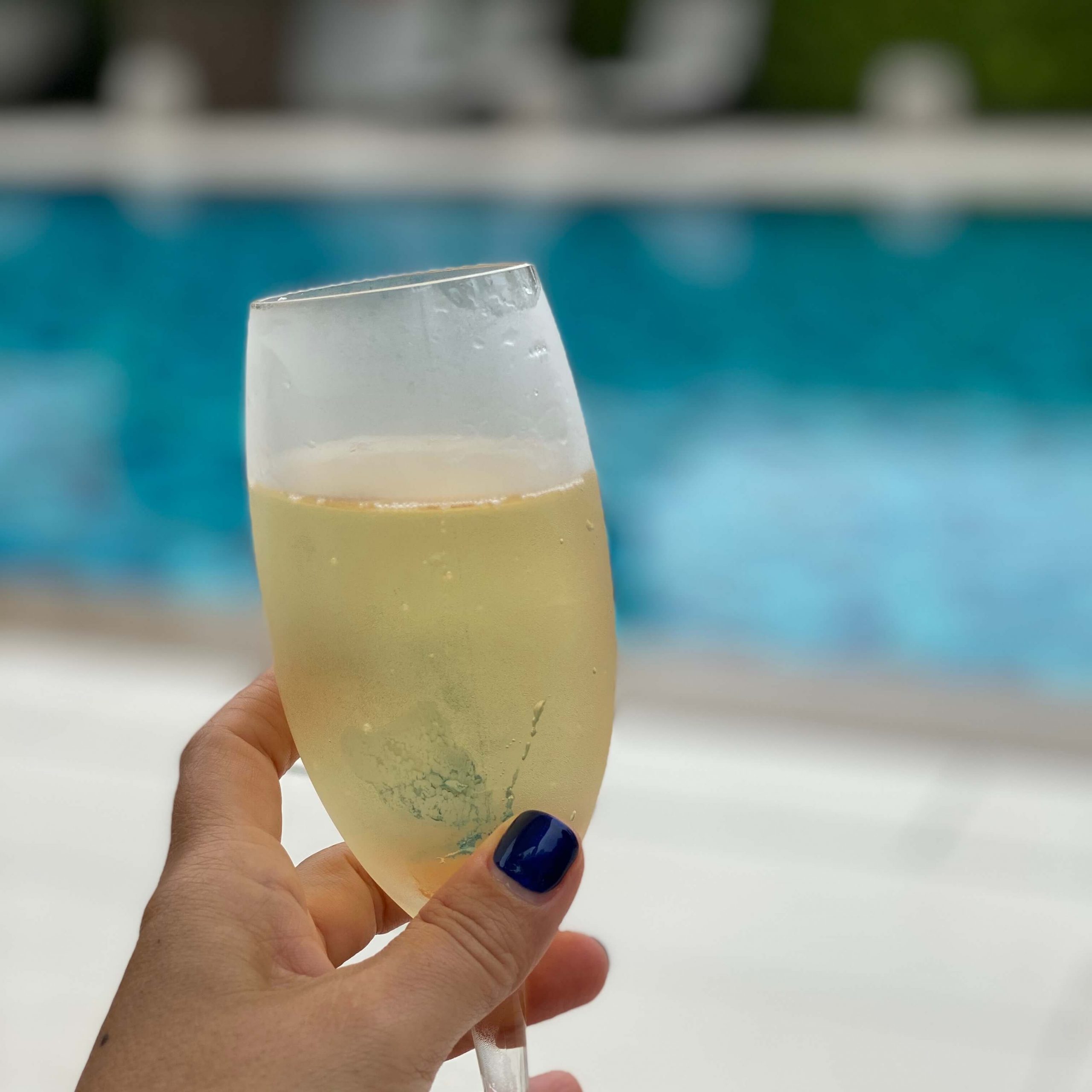 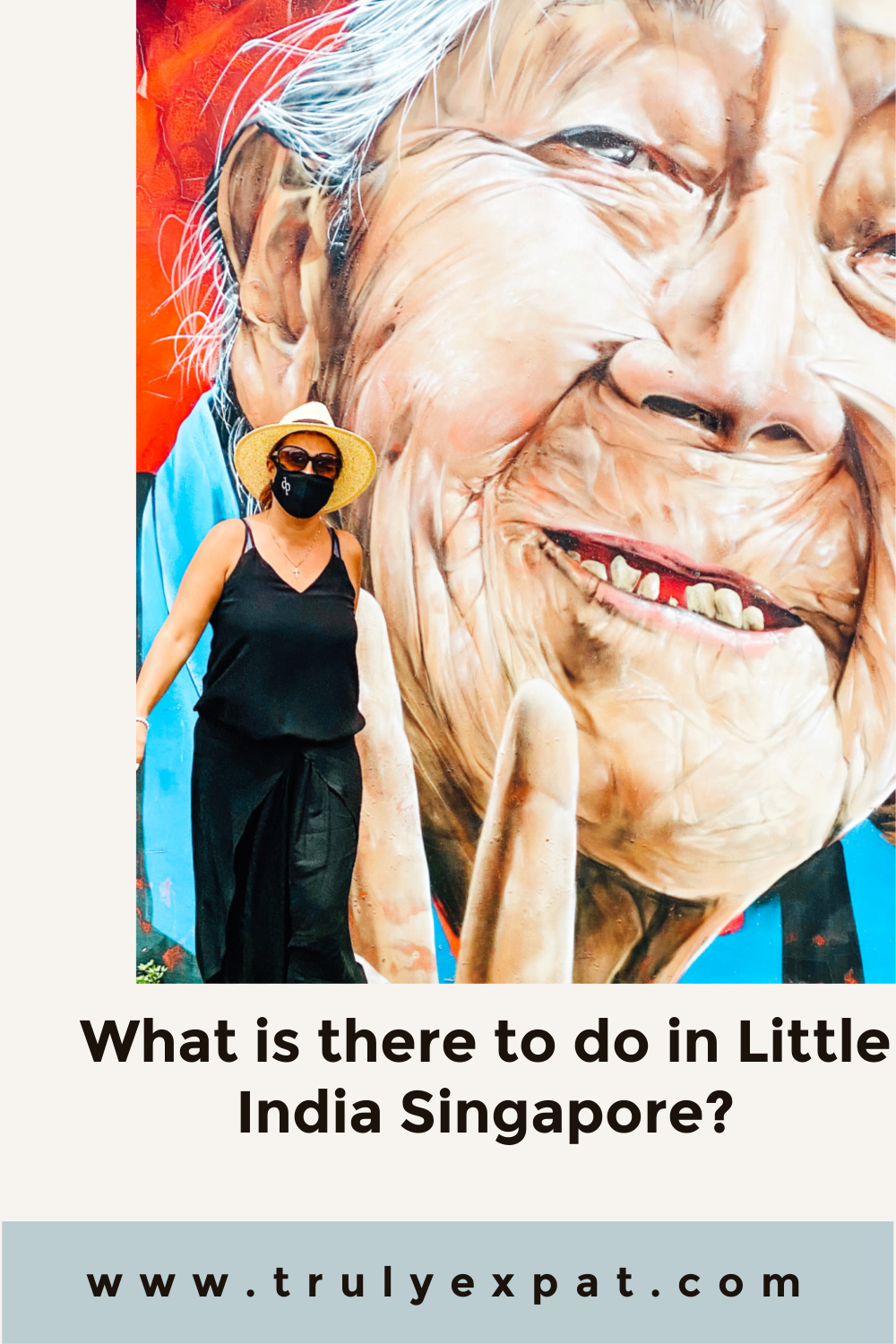 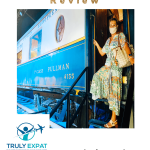 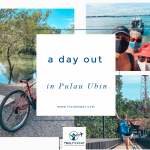 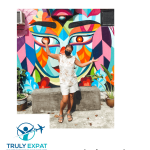 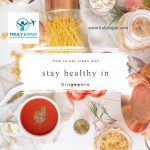 1 thought on “What is there to do in Little India Singapore?”